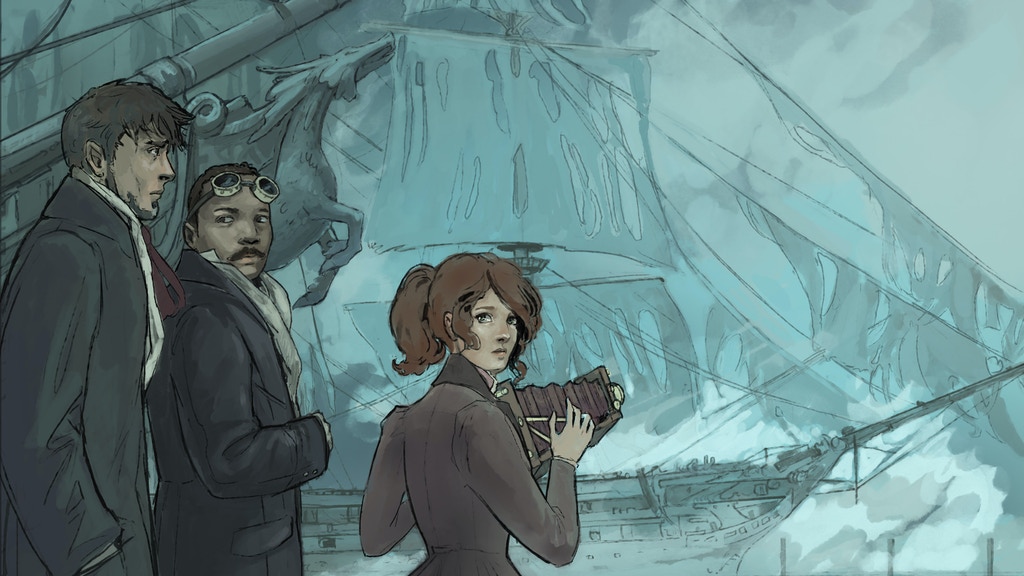 Created by Queen of Mercia LLC

Samuel, Caitlin, and Granville must solve the deadly mystery of a ghost ship in this 8 episode audio drama.

Latest Updates from Our Project:

And if we make stretch goal #4 (which I think we will), there are two more magnets up for grabs.


There's  more to come, so please head over to the Kickstarter page and pledge today.

Thank you so much for your support.

The Boston Metaphysical Society:  Vol. 2 is now LIVE!  And even more amazing, we were chosen as a “Project We Love” right out of the gate!  I’m so excited about this new volume with a new story with Roberta Ingranata and the cover by Marguerite Sauvage I know you will be too.

Please consider pledging today. Thank you in advance for your support.

I'm please to announce that the Kickstarter Thank You Wall is now LIVE! Please let me know if I have accidentally left you off the list or misspelled your name, and I will correct it.

For those who missed the last update, I will be launching a campaign to print the trade paperback of all four sequels, plus an exclusive ten-page bonus story with art by Roberta Ingranata. Here's a peek at one of the panels.

You can sign up here to be notified when we launch.

In other news,  I had the pleasure of having dinner with the Lady Mechanika team at WonderCon. It was a delight to meet everyone, and I look forward to working on the story.

I'm also working on the next Boston Metaphysical Society graphic novel series. It will be a four-issue story arc, but this time we are heading to Colorado Springs for a new adventure.

And I'd be remiss if I didn't mention a couple of cool Kickstarters going on right now.

If you haven't heard of White Ash yet, then you are missing a treat. The story is about a small smudge of a mining community in Western Pennsylvania, where the  secrets are buried even deeper than the coal under the mountain. If  you’re a fan of Supernatural, Twin Peaks or Lord of the Rings, you’re going to love getting to know our mysterious town.


This campaign is to raise funds to print the 64 page comic White Ash: Deluxe Edition. It has already crashed through a number of stretch goals.

This one is tons of fun. (And I'm not just saying that because Rob is my friend.) If you like Buffy, horror, and cool supernatural elements, then this is for you. The story is about a young man, who after discovering he's descended from a line of werewolves, is thrust into a supernatural war.

The campaign is to print issue 6, but the first five will be available as well.


As always, thank you for supporting the project.

I just dropped off the last of the physical rewards at the post office. Yah! Those were all international backers, so they are on their way!  I'm still missing a few surveys. If you can't find yours, please click on this link to recover it:  https://the-ghost-ship-audio-drama.backerkit.com/

Yup. I'm running another one. Here is the lettered version of the cover. (Cover by Marguerite Sauvage.)


Vol. 2 will include all four of the sequels plus an EXCLUSIVE TEN-PAGE STORY with art by Roberta Ingranata. It will launch on April 12. Click here to be notified.

Lovecraft meets Wonderland in this amazing anthology with awesome work from a bunch of friends of mine.

Alice In Wonderland is a timeless fantasy story known the world over.  Lovecraft, and more notably Cthulhu, have been in our nightmares for  more than 100 years. Comic creators have been telling stories in these  worlds since the creation of comic books.

Like Darkhawk, Ben 10, and Tech Jacket? Then you'll enjoy this book and its  otherworldly adventures as it brings back the nostalgia of the 80s and 90s Saturday cartoon's that a lot of us grew up  enjoying.

Corey is a high school student doing his best to help his single Mom, his genius sister, all the while barely passing math. While he struggles to be seen amongst his over achieving friends, life changes dramatically when an alien offers him a super-powered suit.

Thank you so much for backing the project.  More to come!

I'm thrilled to announce that the CDs have arrived and they look great!

I will start packing them up tomorrow to mail out. Those who ordered flash drives AND a CD will get them in the same box.  U.S. backers who ordered books as well, will probably be getting them in two different shipments.  (Note to International Backers with book packages:  I will be splitting those shipments into two boxes and send them out about a week and a half a apart to help keep down VAT.)

There are still a few outstanding surveys. If you have lost yours, please click on this link to recover your survey.  https://the-ghost-ship-audio-drama.backerkit.com/

On April 12, I will be launching a Kickstarter to print a trade paperback compiling all four sequels: The Scourge of the Mechanical Men, The Spirit of Rebellion, Ghosts and Demons, and The Book of Demons. What makes this trade special is the BRAND NEW EXCLUSIVE TEN-PAGE STORY with art by Roberta Ingranata as well as this amazing cover by Marguerite Sauvage. The book will be a huge 172 pages long!

And I can't forget to mention a couple of cool Kickstarters that are going on right now.

Discover the new frontier in science fiction with this incredible series.

Based  on the scientific theory which many scientists now believe is our only  method of extrasolar travel, Directed Panspermia - ARKS is the story of  Joseph and Lilith. Two planetary engineers (Arks), who are booted by  bacteria onto a terraformed world orbiting a distant star. To their  horror, they discover that the process may have accidentally turned the  entire planet into a bomb. Do they try to survive in this brutal and  cruel world or do they do the unthinkable and euthanize the species?

Miskatonic High Issue 14 - In the grip of the Aswang

If Ren and Simon are to find Ren's missing mother, they'll need to escape  the clutches of the vampiric Aswang! Season 3 starts here!

Welcome back to Miskatonic High, the  comic series about the teens who  take on H.P. Lovecraft-style monsters  and their small-town  high school...they're just not sure which is worse.


Thank you for your support of The Ghost Ship.